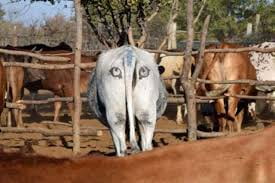 This week my class learned about how farmers would paint eyes on the butts of cows so lions wouldn’t attack them. I wasn’t     in class when this happened so I did my own research.

Farmers in Botswana we’re having problems with their cows being killed by the local African Lions. Originally the farmers shoot or poisoned the lions. Besides the ethnical problems this caused, the loss of lions could uproot the entire food web. They tried to find a solution to this problem which didn’t involve killing the lions. In collaboration with the BPCT and the UNSW they created the i-cow project.

Lions are ambush predators, so they will call off a attack if they believe to have lost the element of surprise.  Many animals have evolved eyes on their back to deter such ambush predators. This gave Conservation biologist Neil Jordan an idea. If farmers painted eyes on the butts of their cattle the lions wouldn’t attack. No other mammals have eye spots. This is the first time humans have given him the animal eye spots. Eventually lions realize that cows don’t actually have eyes on their butts, but the trick works at least for a few years.

One thought on “i-Cow Project”